The Mythology of Conformity: Totem and Taboo

The story goes like a joke: five monkeys and a banana. Or a parable: under the banana there was a ladder, and every time a monkey climbed the ladder to reach for the banana, he and the other monkeys in the group received a shock of cold water. Eventually no one reached for the banana at all.

In this famous experiment, monkeys conditioned not to pursue the banana were replaced one by one with unconditioned monkeys. Each time a new member of the group began to climb the ladder to get the forbidden fruit, the rest of the group dissuaded him by force, regardless of whether they themselves had experienced the cold water spray. The banana had become taboo.

Eventually the entire group was replaced with monkeys who had never experienced the water spray firsthand, yet the banana remained untouched. The conditioning had become self-perpetuating, independently functioning upon its own momentum.

Studies in group theory indicate that we naturally bend our opinions at least marginally if not majorly to conform to group values and standards. Who among us hasn’t found themselves laughing in a moment of group solidarity without quite getting the joke?

In the Asch Conformity Experiment, test subjects were placed in groups consisting of fake participants and asked a variety of questions. Such as, “Compare the length of A to an everyday object,” “Which line is longer than the other?” and “Which lines are the same length?” etc 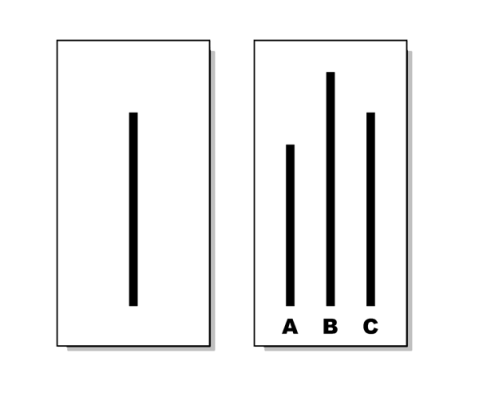 When alone, the answers people gave were almost unanimously correct. In the groups of fake participants, however, when each person had to say their answer out loud, incorrect answers proffered confidently by fake group members caused test subjects to falter and give 30 % incorrect answers to these deceptively simple visual tests.

In his explosively titled work, Totem and Taboo: Resemblances Between The Mental Lives of Savages and Neurotics, Freud speculates that modern institutions such as family, law, and religion still closely resemble the tribal cultures from which they sprang, specifically in totemic projection and conformity achieved through the exercise of taboo.

Derived from the term “ototeman” in the Ojibwe language, meaning “brother-sister kin,” Totemism indicates the veneration of sacred objects as symbols. A totem is any animal, plant, or other object, natural or supernatural, which provides deeply symbolic meaning for a person or social group. A great example of modern totemism can be found in sports fans.

For Alan Watts the primary taboo in today’s culture is against knowing the true nature of the self, which he suggests is multi-dimensional and universally connected. “If you go off into a far, far forest and get very quiet, you’ll come to understand that you’re connected with everything.”

Watts elaborates, “Although our bodies are bounded with skin, and we can differentiate between outside and inside, they cannot exist except in a certain kind of natural environment. […]We do not ‘come into’ this world. We come out of it, like leaves from a tree.”

In 1954 Robert Bannister was the first man recorded to run a mile in under four minutes. Though never before achieved, after Bannister proved it possible, the  four minute mile barrier was soon broken by others.

What are the grand, socially defining taboos that hold power today in your country? What taboos exist within your social culture? Do they make sense, or are the conditioned monkeys dissuading you from reaching for your banana?

§ 8 Responses to The Mythology of Conformity: Totem and Taboo

You are currently reading The Mythology of Conformity: Totem and Taboo at PARALLAX:.