The Secret Life of Trees & The Science Behind Forest Bathing 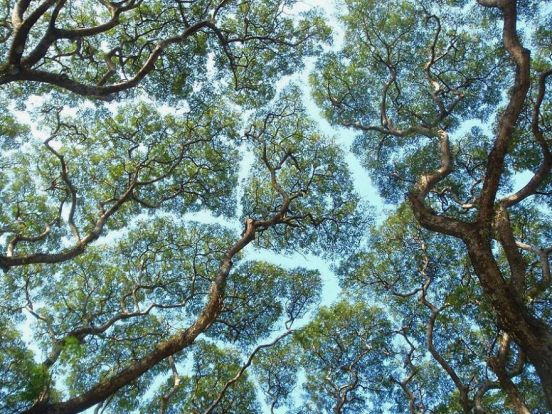 [Trees exhibiting a behavior called “crown shyness,” when they don’t touch branches in order to cohabit peacefully without blocking one another’s light]

“A force hums in the heart of wood…the tree is saying things, in words before words.”

“The clearest way into the Universe is through a forest wilderness.”

Recent studies confirm what poets & dreamers have always known in their hearts: the trees are talking to each other.

A revolution has been taking place in the scientific understanding of our arboreal friends. Biologists, ecologists & foresters are observing that trees have a quantifiable communication system and intelligence.   We are learning that the forest is a community that cares for its own. Trees are social beings who work together for the survival of the whole.

There is a growing body of evidence, pioneered by forest ecology professor Suzanne Simard, which shows that trees communicate through interconnected root systems, in collaboration with fungal networks. This symbiosis forms what is known as “the wood wide web.”

This unifying network is composed of mycorrhizal fungi, of which there are many different species. The fungi send out gossamer-fine threads through the soil and weave into the tips of plant roots, bonding at a cellular level and creating a super-organism. 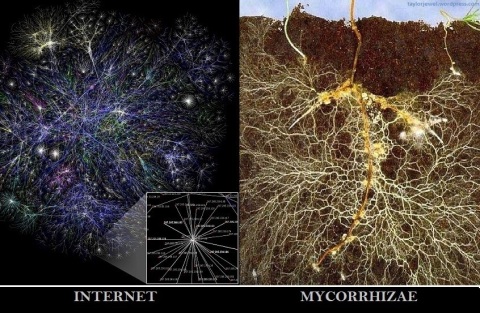 This collaboration of roots creates an information superhighway, functioning like an underground organic internet. The wood wide web connects whole forests, enabling trees, not only to communicate with one another, but also to share resources.

For example, a tree which receives an excess of sunlight will transmit the resulting nutrients via the wood wide web to a tree that receives only shade. Healthy trees have been known to nurse felled friends, keeping stumps alive for as long as centuries. Parent trees nourish their saplings via the wood wide web, and will even reduce their own root growth to make room for their offspring.

Forest dwelling networks of trees warn one another of danger–-drought, predators, or disease, for instance. They do this by sending electrical signals through their root systems, simultaneously releasing molecules into the air; chemicals which act as messengers. Information can be transmitted in as little as seconds, or take as long as days.

Responding trees then alter their behavior, releasing chemical defenses to ward off predators or conserving water in the case of a drought warning. Trees will even alter their chemical composition in response to warning signals sent by friends under attack, making their leaves taste more bitter to an influx of a certain predator. In short, they work together to survive and thrive. 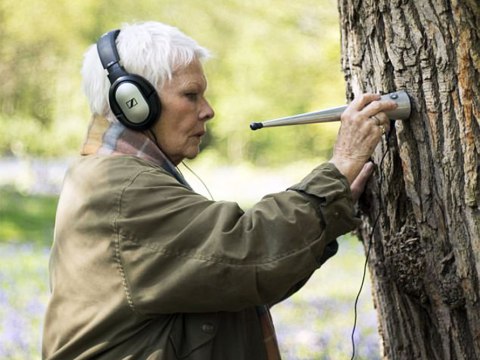 [Actress Dame Judy Dench in her recent BBC documentary “My Passion For Trees.”]

How might our own communities improve if we took our inspiration from the forest? What does this new understanding of trees have to teach us? Nature is wise. She knows that in giving, one receives, and that the benefit of one improves the whole.

“A tree can be only as strong as the forest that surrounds it,” notes Peter Wohlleben, arboreal ambassador & author of the best-selling book,  “The Hidden Life of Trees: What They Feel, How They Communicate – Discoveries from a Secret World.”

As Biology professor, George David Haskell notes: “Dogmas of separation fragment the community of life; they wall humans in a lonely room. We must ask the question: ‘can we find an ethic of full earthly belonging?’” (“The Songs of Trees.”)

Theoretical physicist David Bohm notes that the process of dividing the world into parts is a convenient way of thinking when applied to practical matters. But then we become fooled by our own fragmented perception.

“Man thus obtains an apparent proof of the correctness of his fragmentary self-world view, though, of course, he overlooks the fact that it is he himself, acting according to his mode of thought, who has brought about the fragmentation that now seems to have an autonomous existence, independent of his will and of his desire.” (“Wholeness & Implicit Order.)

[Portrait of Picasso by Juan Gris]

What better way to reconnect with our environment than a walk in the woods?

The Japanese have a word, shinrin-yoku, which translates to “forest bathing,” and means “taking in the forest atmosphere.”

Developed in Japan during the 1980s, shinrin-yoku has become a cornerstone of preventative healthcare & healing in Japanese medicine. 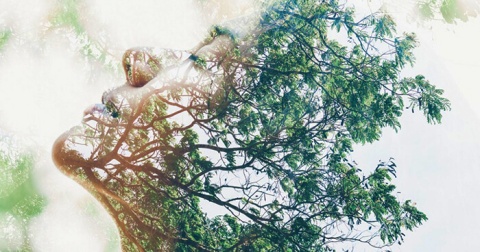 Scientific experiments conducted in Japan reveal a host of health improvements that result from a simple 40 minute stroll in the woods:

Studies show that people who just looked at a forest view for 20 minutes had a 13% lower concentration of the stress hormone cortisol. (“The Healing Power of Trees.”)

Many trees give off organic compounds that support our “NK” (natural killer) cells, which are part of our immune system’s way of fighting cancer. (“The Science of Forest Therapy.”)

Trees have occupied a sacred place in human mythology for all of time. The Tree of Life appears in all of the world’s major religions, while The World Tree appears in a host of Indo-European & Native American cultures.

With its roots in the underworld, it’s trunk in our dimension, and its branches reaching up into the heavens, the World Tree is seen as being the axis that holds the cosmos together.

I’ll leave you with a bit of tree wisdom from zen master Thich Nhat Hahh:

“I asked the leaf whether it was scared because it was autumn and the other leaves were falling. The leaf told me, ‘No. During the whole spring and summer I was very alive. I worked hard and helped nourish the tree, and much of me is in the tree.

“Please do not say that I am just this form, because the form of leaf is only a tiny part of me. I am the whole tree. I know that I am already inside the tree, and when I go back to the soil, I will continue to nourish the tree. That’s why I do not worry. As I leave this branch and float to the ground, I will wave to the tree and tell her, ‘I will see you again very soon.’”

You are currently reading The Secret Life of Trees & The Science Behind Forest Bathing at PARALLAX:.