“Politics is the art of choosing between the disastrous and the unpalatable.”

“We try to fix the outside so much, but our control of the outer world is limited, temporary, and often, illusory…achieving durable happiness as a way of being is a skill. It requires sustained effort in training the mind and developing a set of human qualities, such as inner peace, mindfulness, and altruistic love.”

On top of an already fraught, fearful & divided world, the approaching presidential election of 2016 has ramped up feelings of rage, alienation & despair across America.

In part, because social issues—race relations & sexual politics—are at the forefront of the debates between Clinton & Trump, this election season has invoked a truly personal, emotional response in us.

The advent of smartphones has given us the means to monitor our monitors, and footage of police abuse of power against black male bodies surfaces constantly, raising pleas for social justice to a fever pitch.

While many are listening to these raised voices of protest, large swaths of the conservative demographic are reacting with mistrust and shutting down. And so the #blacklivesmatter movement gives way to responses of #allivesmatter and #bluelives (meaning officers) matter.

Yes. We all matter. That is the point of the “black lives matter” hashtag—a reminder that a swath of our “all” is struggling and needs attention.

As if this issue weren’t fraught enough, it has become politicized. The left, being the party of social progress, has taken up this and other causes, attempting to “explain it” to the right; which has largely been perceived by conservatives as a buzzword-fueled lecture and accusation.

Although it may be difficult to understand why anyone with such superior social power would deign to listen to the struggling underdog, this reaction itself is framed in a certain view with specific assumptions. The people who aren’t hearing the message behind #blacklivesmatter, for instance, aren’t filtering it through the same set of reference points. The right perceives itself as the underdog under attack.

The “us” vs. “them” mentality is in full effect, raging across America like a wild fire. We seem to be in a Chinese Finger Cuff situation—the harder we pull, the more stuck we become; if the goal is ultimately peace and human unity. Which, come on, if we are to survive as a nation and a species, it logically has to be.

One important fact to remember is that the “us” vs. “them” mentality is literally hardwired into our neurology; the second we identify with a certain group, it has been proven in experiment after experiment that the brain begins filtering facts to skew the data towards the perceived “us.”

“Our tendency toward partisanship is likely the result of evolution—forming groups is how prehistoric humans survived,” remarks Brian Resnic (“How Politics Breaks Our Brains.”) “That’s helpful when trying to master an unforgiving environment with Stone Age technology. It’s less so when trying to foster a functional democracy.” 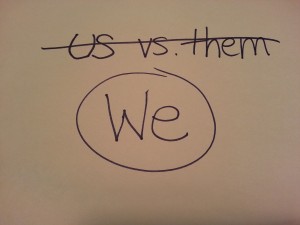 “Studies have shown,” adds Steven Handel, “that people tend to favor a group bias even when they are categorized on relatively meaningless distinctions, for example: eye color, what kind of paintings they like, or even the flip of a coin.

This tells us that we can potentially separate ourselves from a certain group of people on any random and arbitrary characteristic. Therefore, everyone is susceptible to be a perpetrator and/or victims of social prejudice and ostracism.” (“The Us Vs. Them Mentality.”)

Although it feels like things are getting worse, this very well may be a time of national exorcism; the rock we didn’t want to look under has been overturned and we are staring directly at its maggoty underside. At least now we are facing it directly; the dank hidden pocket of darkness is being aired. And we are looking at it, talking about it.

A hundred years ago, only white men could vote in America. Today we have a black president and a female candidate. We have progressed! But we are still healing from historically recent wounds. Sociological blindspots, unconscious prejudice, glass ceilings and abuse of power still remain as a result of that past. The specters of oppression can not be banished so easily or quickly.

With emotions running high and so much dissonance in the air, empaths and highly sensitive people are particularly vulnerable to depression & anxiety—it is essential that we combat this by practicing steady, systematic, daily routines of self-care. We must stoke our own light in order to better illuminate this darkness.

As we all navigate these stormy times of controversy, misunderstanding, anger, alienation and above all the tendency to break off into warring factions, let us try to outsmart our biology.

When politics breaks our brains, let us turn to the heart. For our goal logically must be harmonious co-existence, and we are united by more than divides us.

You are currently viewing the archives for October, 2016 at PARALLAX:.