The Art of Seeing: Third Eye Perception & The Mystical Gaze

“No wonder once the art of seeing is lost, Meaning is lost, and all life seems ever more meaningless.” ~ Frederick Franck

“Our whole business in this life is to restore to health the eye of the heart whereby God may be seen.” ~ Saint Augustine

Every one of us has had a moment where ordinary life becomes shot through with clarity, intense presence and visual potency. A person, animal or perhaps a plant — a scene of startling beauty or realness — seems to take on a luminous dimension, lit from within with living essence. For a moment, all of life feels that much closer, more charged and meaningful.

As artist Ernest W. Watson, said, “There is a vast difference between looking and seeing.” It can be said that in these radiant moments we are truly seeing, through the lens or the eye of the soul.

The concept of the third eye appears in a wide gamut of mystical traditions, including Hinduism, Taoism, Tibetan Buddhism, Jewish and Christian mysticism. The third eye — also known as the blue pearl, the inner eye, and the sixth, or ajna, chakra — is traditionally associated with psychic experiences, divine seeing and the higher visionary realm.

It has been called a gateway that leads to inner realms, and other worlds; a personal vortex.

The pineal gland — a small endocrine gland nestled between the two hemispheres of the brain — is considered by many to be the physical counterpart to the spiritual third eye. Up until 1958, when Aaron Lerner discovered that the rice-grain-sized gland transformed serotonin into melatonin and regulated wake/sleep patterns, it had been regarded by the scientific community as very likely vestigial.

French philosopher Renee Descartes called the pineal “the seat of the soul,” postulating that the gland interacted in some way between the eyes and the brain, acting as the chief interpreter of vision…an idea developed  hundreds of years before by the father of the Scientific Method, the ancient Greek physician Herophilos. Through his pioneering anatomical dissections, Herophilos theorized that the pineal glad was an interfacing organ that gained man access to the spiritual worlds.

This theory is compatible with the ancient Eastern belief, from Hindus to Taoists, that the luminous sphere witnessed in the inner eye region is in fact the same tunnel through which the human soul exits the body. 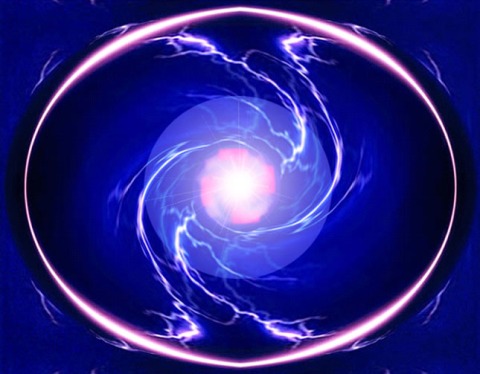 If you want to develop your third eye vision, you can do so by taking a few moments out when you are calm and relaxed, closing your eyes and focusing your attention within, specifically towards the spot between your brows.

The undulating sparks which can sometimes be seen behind closed lids, or in total darkness, are called phosphenes — characterized by seeing light when no light is actually hitting the retina. Keep focusing on the third eye region whenever you have a few minutes to dedicate to the exercise.

Don’t strain, just casually return to this practice when you feel like it. Over time, you may begin to have some interesting experiences.

*Please share your experiences with the third eye in our comments section! (Under title.) There, you will find notes on practical application and learn about other reader’s experiences—as well as the author’s—with third eye visioning.

§ 157 Responses to The Art of Seeing: Third Eye Perception & The Mystical Gaze

You are currently reading The Art of Seeing: Third Eye Perception & The Mystical Gaze at PARALLAX:.