Polarity and Paradox: Black and White Thinking in a Rainbow World

“To offer the leadership and vision our times require as individuals, professionals, change agents in any domain, and even as spiritual leaders, wisdom dictates we move beyond unconscious polarization – not just intellectually, but in the very words we speak and the actions we take.” ~ Ragini Elizabeth Michaels

“To set up what you like against what you dislike is the disease of the mind.” ~ Jianzhi Sengcan

From an evolutionary standpoint, it makes sense to think in terms of black and white.

If one extreme presents itself, such as a predator, it’s logical to put as much space between you and that danger as possible, to go the opposite direction. It makes sense to label the saber tooth tiger “unsafe” and the cave where he can’t reach you “safe.” In situations so basic, locations which are “somewhat safe” are ineffective to ponder.

But we no longer live in an age where this kind of thinking serves us. In fact, the cognitive distortion brought on by viewing a complex world through the simplistic lens of “this or that,” “all or nothing,” “either/or,” can harm relationships, diminish well-being and limit our overall understanding of the world. In viewing a multi-faceted situation through a binary lens we are bound to miss essential details.

In the modern era the ability to perceive nuance, ambiguity and paradox is considered the height of cognitive vitality. Finding balance between seemingly contradictory elements is believed by many to be the road to inner peace.

Language itself promotes dualistic thinking. ‘Difficult’ and ‘easy’ define each other. What would ‘calm’ mean without ‘anxious?’ ‘Up’ makes ‘down’ distinguishable.

Even the simplest, most everyday question — “How are you?” — pressures us to pick a side. If, for whatever combination of reasons, our focus happens to be on the pleasant, enjoyable, fulfilling aspects of our lives that day, we will likely answer, “good!”

If, for whatever combination of reasons, our attention has been brought to the difficult, frustrating, undesirable aspects of our lives, we may say the social equivalent of “bad” (“not so good,” “seen better days,” etc.)

Yet, our lives at all times contain both pleasant and challenging aspects. What has changed, more often than not, on the days we say “good” from the “I’ve had better” days is simply our focus.

Middle ground responses will likely provoke an interpretation veering towards the negative. For instance responding with a shrug, “So-so,” “I’m okay,” or the unlikely but far more accurate, “I’m both good and bad,” will be read as unspecific and inspire detail pressing. The most honest answer (“I am”) would be considered highly uninformative.

“While we speak to the unity and harmony of the whole as our desired goal,” writes Ragini Elizabeth Michaels in her article “Managing a Paradoxical Life,” “our language itself too often reveals an unconscious choice of one pole of a polar pair as more important, or more right, than the other – spiritual over material, peace over conflict, trust over doubt, unity over diversity, harmony over discord.”

A false dilemma (also called a false dichotomy, or black-and-white thinking) is a type of logical fallacy that involves a situation in which only two alternatives are considered, when in fact there are additional options. (“It wasn’t medicine that cured Mrs. X, so it must be a miracle.”)

Marked by a logical leap and the oversimplification of a more complex matter, a false dichotomy may be presented intentionally, in order to manipulate a perspective (“You’re either with us, or you’re against us,”) or unintentionally, due to an assumption (“He wouldn’t do that if he loved me.”)

Social systems reinforce this kind of polarized thinking. For example, if you want to identify with a political party of any influence in the United States you have two choices: either you can identify as pro-peace, pro-gay, pro-tax, pro-regulation, pro-choice and anti-gun or pro-military, anti-gay, anti-tax, pro-free market, pro-life and pro-gun.

What if you are pro-gay, pro-free market, anti-tax, pro-life, pro-peace and pro-gun? Too bad. Pick a side or your vote yields no power. Cultural splitting such as this encourages people to think in unnecessarily polarized terms. 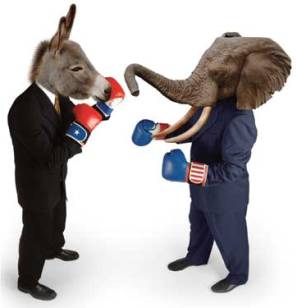 In structuralism (the sociological study of cultural context) dividing the world into two opposing categories, known as  binary opposition, is seen as a fundamental organizer of human philosophy, culture, and language (for example, we need the idea of “evil” in order to conceive of the concept of “good.”)

But others (post-structuralists in particular) argue that such binary opposition is often value-laden and ethnocentric.

French philospher Jacques Derrida agrees that binary oppositions often marks “a violent hierarchy” where “one of the two terms governs the other.” For instance, in the West, the idea of presence occupies a position of dominance over absence, because absence is traditionally seen as what you get when you take presence away.

In this way, binary language can be linked with hierarchy and oppression. For instance, male can be seen, according to traditional Western thought, as dominant over female because male is the presence of a phallus, while the vagina is an absence, and therefor seen as a loss. 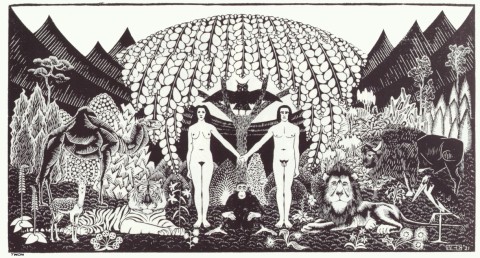 “Black and white thinking doesn’t just hurt ourselves, but also the relationships we try to build with other people. When we view the world in strict and over-simplistic terms, we are less likely to compromise and cooperate with others to meet common interests,” notes psychology writer Steven Handel.

“We lose in black and white thinking because we are never going to be everything we want to be. We’re always going to be lacking something if we’re trying to measure ourselves on some black-and-white scale where x is good and y is not good. We’re never going to be able to be completely x. It doesn’t happen, because we’re human – we’re unfinished – and we’re not simple.”

“A black and white viewpoint often creates artificial ‘needs’ in our life that lead to disappointment and depression,” continues  Handel, adding that the cognitive-based psychotherapist Albert Ellis called one example of this ‘musterbation.’ “This is our tendency to think that we must have something, or we must do something, or life must be a certain way – or it will be awful.

“Black and white thinking doesn’t open us up to the possibility that even if life doesn’t work out exactly the way we think it should, we can still find happiness.”

Ragini Elizabeth Michaels agrees: “We may think that by eradicating the pole we don’t want, we are creating a non-dual universe, or ‘fixing the problem.’ We may believe that the dilemma, or duality itself, with its conflicts and tensions, will then somehow disappear. Or worse yet, we may begin to perceive the spiritual as the solution to the problems of the material world – which, paradoxically, it is and it is not.

“In contrast, depolarizing the mind frees us to perceive war and peace, anger and compassion, freedom and responsibility, and even duality and non-duality, as partners, and to perceive the friction or tension between them as creativity in disguise. This shift in perception changes everything.”

German philosopher  Hegel saw history as a merging of opposites, creating progress: one viewpoint (the Thesis) merges with another, seemingly polar, viewpoint (the Anti-Thesis,) creating a new entity altogether, the Synthesis. This process is known in philosophy as the Hagelian Dialectic. For Hegel, dialectic tension is inherently creative and capable of union.

Great thinkers have always embraced paradox — looking past black and white simplification into a world where seemingly contradictory forces can co-exist. Kierkegaard said: 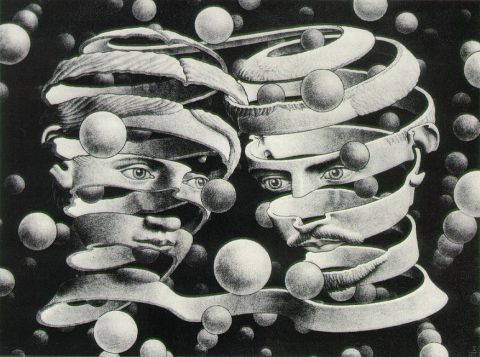 In Asian philosophy, the concept of yin yang (referred to in the West as “yin and yang”) describes how seemingly contrary forces are interconnected and interdependent in the natural world, giving rise to each other in turn. Yin yang are not opposing forces but complementary opposites that interact within a greater whole.

Paradox is the heart and soul of Zen philosophy.  As Lau-Tzu said, “If you want to become full, let yourself be empty…Look, and it can’t be seen. Listen, and it can’t be heard. Reach, and it can’t be grasped… seamless, unnamable, it returns to the realm of nothing. Form that includes all forms, image without an image, subtle, beyond all conception…You can’t understand it, but you can be it. The Tao is beyond is and is not…”

Next time you find yourself feeling anxious over some perceived reality, take note. Are you making a logical leap that if X is true, then so must Y? Are you boxing yourself or someone else into an all-or-nothing false dilemma, considering only two alternatives where there are many? Ignoring seemingly contradictory aspects in order to create the illusion of a more manageable whole? In the end, the dualistic world view is not more manageable. It is more prone to distortion.

Am I saying to abandon discernment? On the contrary! By releasing preconceived dualistic notions we open ourselves to perceive a greater spectrum. 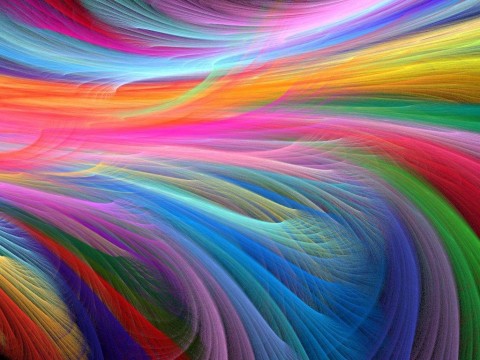 So take off those black and white glasses and behold the multi-colored world!

§ 27 Responses to Polarity and Paradox: Black and White Thinking in a Rainbow World

You are currently reading Polarity and Paradox: Black and White Thinking in a Rainbow World at PARALLAX:.